Chinese New Year Through the Eyes of a Laowai

People in our part of the world have been talking about the lunar new year for a long time. As a first-time expat to China, I had low expectations. After all, this is not “my” holiday. The new year celebration caught me off guard, and here I present to you a small window into my first Chinese New Year experience as a foreigner.

Most of us who grow up in the States know the feeling of anticipation that comes along with the Christmas season. A sense of excitement fills the air, everyone chats about the holiday and their plans, and preparation begins for meals, decorations, and gifts. Spending my first lunar new year in China, I was struck by the oddity that I could feel that same anticipation. Even though I speak very little Mandarin and had no background in this holiday, I could just tell that the excitement was building all around me.

People cleaned their homes thoroughly. Employees received bonuses. In addition to a bonus, we gave our ayi a fancy box of frozen fish, and she reciprocated with a huge box of butter cookies for the kids.

My husband’s company held their annual Chinese New Year party. All of the employee’s families were invited, and the planning team worked for weeks to arrange a location, a catered meal, prizes, and entertainment.

My daughter’s school invited all of the parents to watch a Chinese New Year performance. I was so proud when my girl spoke into the microphone in Mandarin – with good tones! The children did a dragon dance and lots of songs to celebrate the year of the goat.

Of course, decorations also added to the excitement. My daughter even came home with some window flowers and paper lanterns that she had made in school, and we used those to prepare our home.

The Travel and Meal Prep

For 1-2 weeks before the lunar new year began, people started traveling in droves. Most people left the city to go back to their hometowns and spend the holiday with their extended families. Subways going to railway stations and airports were packed with people carrying luggage and boxes of alcohol, fruits, or nuts to take home with them. Schools let children out for almost one month at this time of the year.

Small family shops closed down early, even a week in advance of New Year’s day, to factor in travel time. 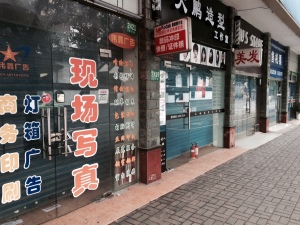 In my husband’s family, the Christmas eve dinner is an event all to itself. The meal spread takes time to cook, but it looks and tastes amazing. Similarly, in China, the New Year’s eve meal maintains a special place in the holiday tradition.

Of course, the Chinese have traditional dishes that they cook and eat for the big meal. Since I know almost nothing about these dishes, I thought it would suffice to ask our ayi to make some jiaozi for us before she began her vacation. These dumplings taste so yummy dipped in a spicy chili paste and vinegar mixture.

I would love to someday share in a New Year’s eve meal that is truly Chinese. In the meantime, we ate our own concoction of American and Chinese foods to celebrate. I enjoyed our evening together as a family, but to be honest, I felt like we were missing something… it was like having Christmas alone, without grandpas and grandmas, aunts, uncles, and cousins. Maybe we can convince someone to visit us to celebrate next year. 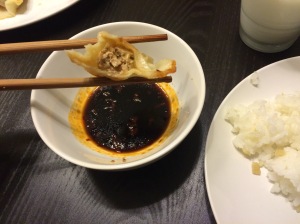 The fireworks in China during the new year holiday are fantastic. Personally, I think that since China invented fireworks, they ought to be spectacular. A good friend put it this way: It’s like all of the 4th of July shows you’ve ever seen, and ever will see, rolled into one night.

Although the police were cracking down a bit more this year on people who might go overboard, fireworks here are basically a free-for-all. Many of our friends have told us stories of their balcony windows being shot out by stray fireworks, or of having to cover their children from fireworks that turn on them from the other side of the street.

On New Year’s eve, our family went out and lit some sparklers, one fountain, and some ground spinners. On our walk outside, I noticed that our security guards had also prepared for the new year fireworks.

Around 11:40pm, the booms began to accelerate. We stood out on our bedroom balcony to see more clearly. The sights were beautiful, with bright blasts and golden fizzles. The flashes of light bounced off of city buildings  and lit up the sky in every direction.

Almost more incredible were the sounds. With pings and explosions ricocheting through the city, our neighborhood turned into an audio war zone. Our neighbors uncoiled a massive roll of firecrackers, which stretched from the beginning of our “cul-de-sac” to the post near their house that they attached the end of the firecrackers onto. They had this down to a science. A little before midnight they came out, laid everything out, and lit it up. Once the firecrackers started popping, they went into the house to save their eardrums. Josh and I stayed out to watch and hear the spectacle, and my ears rang for minutes afterward. 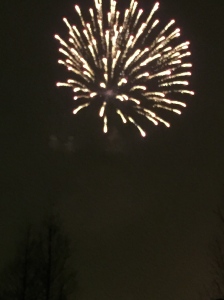 It seemed that there was an entire fireworks show on every block, which made it challenging to take everything in at once. Our incredible children slept through the entire production.

The next morning, our neighbor went out again to unroll his coil of firecrackers, this time to welcome the new year. I was just loading the kids into the car when I noticed activity next door, so I pulled them all out and we watched from the sidewalk. Our neighbor was kind enough to smile at us as we all gawked at him and as I tried to explain to the kids what was happening.

As soon as the noise subsided, our neighbor came back out of his house and handed each of our kids a red envelope, which brings me to the next aspect of the lunar new year.

I could be wrong on this because I haven’t seen it in person, but my understanding is that on the morning of the new year, children wake up early with excitement to rouse their parents out of bed. The children bow in respect to their parents and ask for a hongbao, a red packet or envelope, which contains a gift of money.

My eldest daughter had been begging for a hongbao for weeks before the lunar new year. She learned about it from her Mandarin class at school, and she received an envelope from her teacher which contained chocolate coins.

Josh and I thought it would be a fun tradition to observe, so we surprised the kids with one hongbao each. My two-year-old had been crying about something, but when she ripped into the hongbao and pulled out the contents, her face lit up and she exclaimed, “MONey!”

I told one of my American friends about how generous and thoughtful it was for our neighbors to also give a hongbao to each of our children. We observed that in our culture, giving money is a cop-out gift, the kind of thing that you give to someone when you don’t want to take the time to be personal and creative with a gift. But here, at least at this time of year, a gift of money feels like something special. For us, it was also a great opportunity to work on the kids’ math skills and to teach about saving, giving, and spending our resources.

Many children also receive clothes, since wearing new clothes is a tradition on new year’s day. It reminded me of the American tradition of getting a new dress or suit for Christmas and Easter. It’s a big deal. However, the only new thing our kids received was toothbrushes (because they needed them!). They don’t know anything different, so they were actually quite excited about their little prizes.

Everyone beings a new year with hope, with expectations for what this uncharted year could bring. One of the best questions asked of me in college was, “Why do you get out of bed in the morning?” The answer cannot be as simple as, “Because I have to go to class” or “Because I have to go to work”. You don’t HAVE to do those things. Some motiving factor underlies those decisions. Why do you work? Why do you go to class?

It’s worth asking: What do you live for?

So much of what we live for is merely trinkets, stuff that will rot or go with us to the grave. But I’ve been reminded lately that the hope of the nations, the one that won’t fade, is Jesus Christ. And He gives so much joy – like the blow out your eardrums with firecrackers, dance in the streets, eat huge meals with people you love – kind of celebratory joy.

I don’t know about you, but I spend far too little time celebrating my hope.

That being said, my prayer for the Year of the Goat is this:

“May the God of hope fill you with all joy and peace as you trust in Him, so that you may overflow with hope by the power of the Holy Spirit.” – Romans 15:13

To all of my Asian friends, happy lunar new year!