Eight years ago today, I married this man. 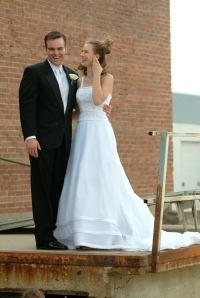 I am so ridiculously blessed.

That day in our small city was just like today in our expansive city: sunny, warm, a bit breezy. In a word, perfect.

Fast-forward six years. My husband and I were happy and content, raising three kids in a good town surrounded by amazing people that we love.

Then, over a year ago, Josh and I began talking in earnest about the possibility of moving to China. No concrete opportunity had presented itself, but his company was getting a new CEO and restructuring a bit, so it appeared that something could open up.

I was intrigued at the idea of a change but also extremely hesitant, for several reasons.

One day early in the summer, I got a babysitter for the kids and took my monthly required “retreat of rest”, as my supervisor called it. I walked through a local garden and spent some time talking with God. While there, I was reminded of a concept that I had lost hold of during the ups and downs of six years.

During high school, I attended a church where we watched videos featuring Ray Vander Laan. He had traveled the Middle East and connected Jewish culture with the life and teachings of Jesus. So much more about Jesus made sense when understood in context.

In one of the segments, Vander Laan explained the traditional process of betrothal. Of course, the process was intricate and the fathers of the woman and man were involved, but what struck me was the moment of the “ask”. The man took a cup of wine, drank from it, and offered it to the woman. This gesture was as if to say, “Here is my life and everything that it holds. Will you accept it?” If the woman drank from the cup, she essentially took the man’s life as her own. Whatever the “cup” of life held in store for them, they would take it together.

On that summer day a year and a half ago, I pondered what it meant to take my husband’s life. Not in a “bumping him off” sense (obviously!), but with the idea that the course of our lives would be one. Whatever he would be called to in the future, I would also be called to.

I couldn’t honestly say that Josh’s interest in China blindsided me. After all, he had studied Mandarin in Beijing for two years, we met at a picnic for new Chinese international students the summer that he returned, he talked about China all the time when we were dating, and for our one-year anniversary he took me to visit Beijing. I could not claim ignorance. I knew what I was getting into.

Let me clarify. Josh is not the kind of man who would dictate that I bow at his feet and yield to his wishes. I knew before I married that I needed a husband who understood my calling and could encourage me in it. In fact, the second time that we visited China together, it was because I realized that even as a mother, I had to continue to grow personally and to keep my love for the nations alive. And so it was that Josh took time off and we brought our toddler and several college students to China for a month.

But the truth is that it’s hard sometimes to bend, to give a little or a lot, to live out the opportunity or dream of your spouse. Sometimes we ask the unvoiced question, “What about me?” I read a great book recently entitled Just How Married Do You Want to Be? by Jim and Sarah Sumner. They rightly noted that marriage is not a competition. Because you are ONE with your spouse, whatever success your spouse gains is your success as well. 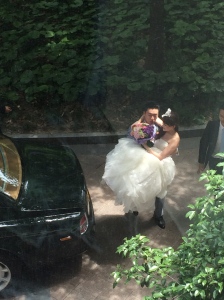 A friend asked me last week if I’m happy that we moved to Shanghai. I don’t know. However, I do know that I am happy to share this adventure with my husband. And because of that, there’s really no place I’d rather be. 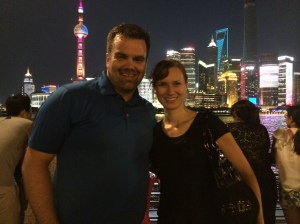 Happy anniversary, Josh. I love you lots! Isn’t it ironic that we married during a Chinese holiday? I guess God has a sense of humor…

One thought on “Taking My Husband’s Life”